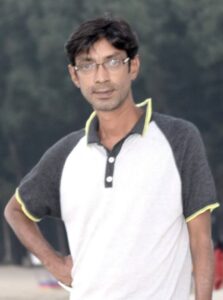 Working as an environmental activist for the last 22 years, produced innovation and implemented bamboo furniture from home to landscape designing with our Forest department at Cox’sbazar.

Volunteering with different grassroots level club since 2005, my aspires to saddle Bangladesh to lead the whole of the planet specially in combating climate refugees’ rights of recognition as Climate Refugees, rehabilitation and adaptation policy making.

As an environmental activist, I have made a team to struggle in traditional folklore adaptation method for 40000 people’s at Cox’sbazar who has been suffering since 1991 as homeless & in migration crisis. Also working with the youth team for Climate Justice in Bangladesh& community building to aware school-college’s regarding Climate Change and impacts by Climate Club through youth.

To work for these people this team has made camps which engaged people into some adaptation initiatives. That has been initiated at the adaptation camp for the Climate Refugees of Cox’sbazar. Those initiatives helped them to sustain from the climate change impacts. The people struggling since last 25 years at the onset of climate change felt first on this ground. The place people named as Global Ground Zero of Climate Change. Besides raised our voice to act on climate justice diplomacy in present conditions to overcome the crisis of global climate governance.